Preparing Your Horse Barn for Ice and Snow Storms 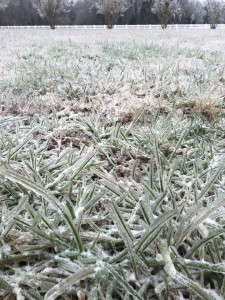 So here I am, 8 days into owning our own horse barn – and I’m sipping hot chocolate to the sound of the generator purring outside my window…   At 5:21 pm on Friday, our power went out – that’s exactly 25 hours ago – but no worries – Duke Progress Energy estimates we’ll have power by 11pm…  On Monday!

The good news is – I was prepared…  I think.   Although the weatherman is rarely correct, I know that we have a farm out in the country, and with only 45 customers on our power grid, we are the last ones to get service if the power goes out.   With the prediction of ice, I had a good feeling we’d lose power, so here’s what I was prepared with (in no order of priority):

Extra water buckets filled.   As our well runs on electricity, the biggest concern I had was making sure the horses had enough water.  Worst case, we have a pond I can draw from, but what I did was took every extra bucket in the barn and filled it with water.  I placed them in our laundry room, as it’s heated and well insulated – meaning it’s the least likely place these will freeze up.  Knowing each horse should be consuming at least 5 gallons of water a day, I went with 4 extra buckets per horse.  My thinking was that I could make it to the store should this last more than 2-3 days – but I’m only 3 miles from a grocery store, so I’d say plan accordingly.  ***Update***  A great suggestion to fill your bathtub as well!  Not only good storage for the horses, but at some point you might need to flush your toilet.  The toilet doesn’t need electricity – just water.  So if your well has stopped, a tub full of water will be extremely useful.  Another great suggestion was getting those large insulated coolers like Gatorade coolers and keeping them filled – as they’re insulated, it won’t take as much time to freeze.

Backup Generator and fuel.  Ok – so these are pricey at a few hundred dollars, but right now I’ve got a heater, a light and my refrigerator running, and I’m thankful for all of them – especially given that I woke up to a nice cool morning temp of 54 in the house!  I’ve also filled up 2 more 5 gallon buckets of gas – and I have the feeling this is going to be critical over the long haul.  ***Update***  For my own notes – my portable generator got about 11-12 hours per 5 gallons of gas, and that was powering a full fridge/freezer, one light and two space heaters.

Lighting.   So I kind of failed on the lighting thing…  I have a high powered LED flashlight, and of course my iPhone and its flashlight feature.   But our feed room doesn’t have any windows, and at night, everything is black.  What I wished I would have had was a large construction flood light to light up the barn.  I do also have a Black & Dekker Storm Station that comes with a flashlight, room light – which would be perfect in the feed room – and a good old fashioned radio where I could have listened to the State/Duke game…  But alas, I didn’t charge it, so for now, it’s just a nice door stop.  I also thought about those battery operated globe lights – the kind your kids use for night lights…  Those would be perfect to light things up a bit, especially while trying to muck the stall in the dark.

Hay and Feed.  I’m adding this on – as it may seem obvious, but I spoke with my hay guy and he reminded me of how many people run out around Christmas time and call him in a panic.  Most of these guys can help you in an emergency, but if they are delivering from a field – their equipment might be snowed/iced in as well – so plan ahead!  I am fortunate enough to have a hay shed in which I keep a couple of month’s worth there, and I have to say, the hay is getting us through this.  We did an extra 4lb drop in a hay bag to help with the boredom and replace some of the lost grazing time, and for the most part, they’ve been content.  ***Update***  Another great recommendation was to keep a sled handy.  If the ice is too much, or the snow is deep – a simple sled you can pull will help you bring in a hay bale by simply sliding it across the mess.

Food & Clothing for You.   Another fail on my part…  We’re again fortunate enough to have a house on the property, but my inlaws live there, and I don’t eat the same things they do (they’re healthy).    So I wish I had brought some food, cereal, snacks, etc with me – but also, as I’m spending most of the day outside, making sure I had extra warm clothes to be outside as well as to change into after.

Cell Phone, Technology and Chargers.   So I’m not an Apple fan-boy, but without my iPhone and iPad, I’d be lost – and this is only day 2.   I downloaded a couple movies for the evening on my ipad, but my iPhone has been essential.  The long battery life, and the access to social media and texts have made me feel like I wasn’t isolated.  My wife let me use her portable charger which provides another 6 hours or so of battery charge.   I do have a Goal Zero solar charger, but again, I left without it.   Solar power charging would have been ideal today.

A Plan for the Horses to Exercise.   So everything here is iced over, and it just isn’t safe to turn out the horses to the pastures.   We do have run-outs, but only half are covered, so the other half are iced over – and although I could try and break it up, I didn’t want to risk injury, and I didn’t want to lose heat from the barn by having them open.  So instead, what I learned from our short stay at Portofino Equestrian was, a nice leisurely stroll through the barn a few times a day is a great alternative.   One at a time, I simply walked the horses around the barn.  It’s a new barn, so it was a good experience for them to explore and stretch their legs.   I did originally walk them outside in our covered arena by pulling stall mats out and making a path from the barn to the covered – but the sound of ice hitting the roof, the new surroundings and the trees bending over was enough to have the horses dancing – so after the first go, I decided walks in the barn were better for all involved.

Blankets and Heating.  We’re not getting much below 25 degrees tonight, so the barn temp will hold steady around 30-32 degrees.  We don’t have a heater in our main barn, and I would never leave a heater in it when I’m not there – but I did cheat today and bring a heater with me while I worked in the barn.  I’m obsessive about safety though – and even when I ran a muck bucket out to the compost pile, I turned off the heater.  But making sure the horses have their blankets – especially mine who was clipped in November – is important.   I’ve read a lot of opinions on this and a lot of people believe horses are wild and survived a long time without blankets…  Well…  Mine have never been wild – and kind of like I grew up in the North and called Southerners weak and soft for thinking 25 degrees was cold…  Guess what – it is cold to me now too.  So if your horse isn’t a wild mustang who’s run free their entire life, I’d recommend planning to keep them warm if you can.

As the coming day’s progress, I’m sure I’ll add more to what I wish I would have done…  After all, I’m a barn owner for the first time these last 8 days – I don’t claim to know everything, but I am a quick study.  Any input from anyone else in similar situations would be greatly appreciated!

Updating the post on 1/24…  Our power came back on in the middle of the night!  So a few more updates below, including some more updates above based on Facebook feedback from the Triangle Area Equestrian’s group (thank you!):

Overall – we held up pretty well with our first test…  But I’m ready for a good nights sleep.  Hope everyone else did well too!

Horse Barns and Boarding in a Storm